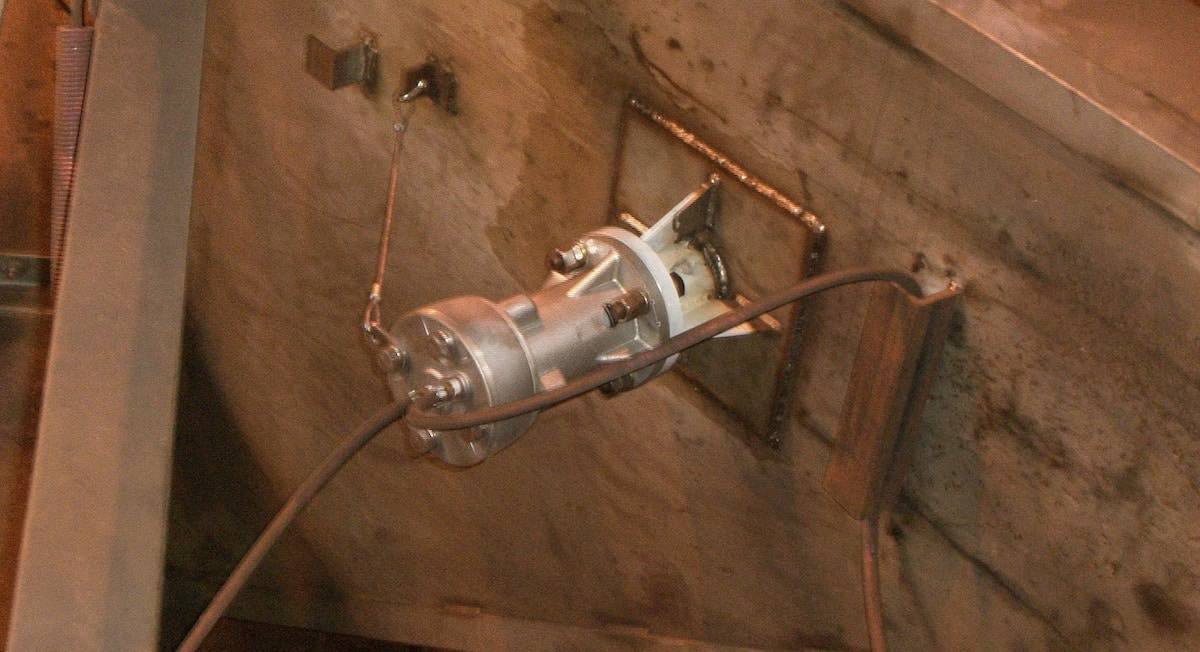 When discharging a bulk material with poor flow characteristics from a feed bin or other vessel, many companies experience material flow problems that prevent the material from discharging smoothly to the downstream process. One common problem is arching (or bridging), in which the material inside the bin forms an obstruction in the shape of an arch above the bin’s outlet. This prevents further discharge and causes production slowdown and interruptions. In 2008, an eastern US minerals processing company was experiencing such problems when discharging manganese from a feed bin to a milling processes. To prevent arching and maintain proper flow from the bin, the company installed two external electromagnetic vibrators on the bin’s bottom selection. However, the vibrators weren’t always effective and arches still formed, requiring an operator to manually break up the arch with a poking rod or sledgehammer. The company found this to be unsatisfactory and decided to replace the vibrators with more effective flow aids devices.

The factory that processes various specialty minerals for a range of industrial and agricultural applications. Plant processes and mills the various base minerals and then packages and ships them to other companies for making final products. The manganese has a bulk density around 120 lb/ft3, average particle sizes from 1.27 (0.5 inch) to 2.54 (1 inch) mm, and a moisture content from 5 to 15 percent. To mill the manganese, the company transfers it into a 3,000 mm (10 foot) by 3,000 mm (10 foot) stainless steel feed bin with a sloped bottom and a 2 by 2 foot discharge outlet that is connected to the mill’s feed system. During operation, the manganese continuously discharges from the bin, and the mill reduces it to a fine powder.

“To ensure a constant flow to the mill, we had to run the electromagnetic vibrators all the time.” Says Paul Stranahan, Prince Minerals health and safety projector manager. “And an operator had to monitor the process to make sure that material was discharging properly from the bin. If the flow stopped for too long we’d have to shut down the mill to avoid damaging it.” Since the manganese moisture content varied, it sometimes formed an arch that even the vibrators could not break up. “We tried heating the manganese to make it less cohesive, but it didn’t help” says Stranahan. “When an unbreakable arch occurred, an operator had to manually break it up by poking a rod into the bin or hitting the bin’s exterior with a sledgehammer. This took extra time and labor and occasionally required that we shut down the milling process, which reduced productivity and added to operating costs.” The company also found that the vibrators were causing costly damage to the bin. “Over time the vibrators cracked the bin welds,” says Stranahan. “To fix them, we had to shut down the milling process and empty the bin, which again reduced production. And if we ran the vibrators for too long after the bin was empty or if they were accidentally left on over the weekend, bin damage occurred more quickly and the vibrators operating life was cut short. Every year we’d have to replace each vibrator two to four times, depending on how the material flowed from the bin and how long they were run. “To improve production, reduce operating costs, and ensure consistent material flow to the milling process, the company needed to find a more reliable way to eliminate aching inside the bin.

For several years, the company has been working with a regional manufacturers’ rep that specializes in bulk solids handling and air pollution control systems. Rep person traveled to the plant in spring 2008 to discuss an ongoing project, and during their conversation Stranahan mentioned the arching problems in the manganese feed bin and the troublesome vibrators. REP suggested that Stranahan replace the vibrators with two pneumatically actuated indirect impact flow aids device which calls AIR KNOCKER manufactured by EXEN Corp. And. The air knocker easily installs on a bin’s exterior and uses compressed air to actuate a piston that indirectly imparts an impact force on the bin wall at regular intervals, similar to hitting it with a sledgehammer but with no damage occurring to the bin.

“REP showed me a demonstration model of the flow aid device and told me how it works,” says Stranahan. “It looked like a good solution to our material flow problem because it requires minimal air consumption to effectively prevent arches, doesn’t need to be operated continuously like the vibratos, and makes less noise during operation than the vibrators. I wanted to try two of them on the bin, so REP took bin measurements and made an engineering drawing and then sent everything to the supplier. Based on that information, the EXEN Corp gave us a quote for two air knockers as well as an installation reference drawing instructing us where and how to install them. Even though air knocker is a little more expensive than the vibratos, we told management that we though they’d work, so they allowed us to install them on the feed bin on a trial basis.”

The company installed two model RKV80PA Air Knocker and an air powered OPECON timer controller, which can operate up to three knockers simultaneously. Air knocker is constructed of a combination of die cast aluminum, ductile iron and carbon steel and consists of a base plate, a mounting base, and air knocker that houses a pneumatically actuated piston. The impact plate is welded to the bin, the mounting base is welded onto the timer plate, and the air knocker is bolted onto the mounting base and connected to a compressed air source via the controller. Air knocker, which weight slightly more than 13.6Kg (30 lb), can be used on any style of bin and any equipment that conveys material, including pipes.

The controller’s manual ON – OFF switch valve allows air knocker to be run continuously during a shift or to be turned on for a short time and then turned off when they’re no longer needed. During operation, air knocker piston hits the impact plate at regular intervals, so there is no direct impact on the bin wall. The impact plate also helps spread the piston’s impact force over a large area to maximize the arch-breaking effect. Using the controller, the operator can adjust the number of times per minute the air knocker activates, ranging from once every 5 seconds to every second (12 to 60 impacts per minute). The company currently has both air knockers set to activate every 5 seconds. Depending on the application, the air knocker requires 3 to 6 BAR (44 to 102 PSI) of compressed air to operate properly. It is variable impact force ranges from 15.2 kg・m/s (108.5 foot pound force per second) to 23.8 kg・ｍ/s (168.5 foot-pound-force per second) and is controlled by adjusting the compressed air pressure. For example, if the compressed air pressure is 3 BAR (44 PSI), then the impact force will be about 15.2 kg・m/s (108.5 foot pound force per second). Each air knocker consumes minimal air when actuating. For instance, if the air knocker is set to activate every 2 seconds, only 18 L (0.63 cubic feet) to 42L (1.5 cubic feet)of air per minute will be consumed, depending on the compressed air setting

Since installing the air knocker, Stranahan says, “We are using our labor more effectively, and we have a more consistent material flow to the downstream process. This, along with the fact that they do not damage the bin, has helped decrease operating costs and improve production capacity. We have also reduced the possibility of damaging the mill because the material feed is consistent. Every so often an operator still has to manually poke the bin to get the material flowing, but that is not because a big material lump sometimes gets into the bin.” The company has not had any trouble with the air knocker or needed to repair or replace them. ” And the operators have not had any complains with how they operate because they are easy to use- there is just one switch that has to be turned on and then everything runs automatically. ” says Stranahan. “Also, because the air knocker do not make a lot of noise when they operate, the operators no longer have to wear hearing protection in that part of the plant. The air knocker consumes very little air and no electricity, which also lowers the operating cost. Stranahan says the air knocker are superior to and work better than the vibrators. “Even though they are a little more expensive, they are better solution than the vibrators, especially when you consider how many vibrators we would have had to replace since installing them about a year ago. We have definitely seen a return on our investment, and that is just counting what we have saved by eliminating replacement costs. Based on how well the air knocker have been operating, we would like to install them on other hoppers in the plant that use vibrators and still experience material flow problems.”

Since 1915, Exen Corp. has been solving clogging problems with its air knocker (impactor). The air knocker continues to perform and provide results on any necessary work type, and is especially effective against fine powders and sticky or clinging ...

No More Banging Your Hopper and Bin