IDAR-OBERSTEIN - Laser diffraction - for quick and reliable determination of the particle size is almost an indispensable method in modern quality control. Areas of application cover practically all branches of industry. For example, laser diffraction can be found in the receiving, but also in the pre-delivery inspection of base materials, in which their particle size is significant for the processability or for the quality and directly related end product. Or for the control of individual process steps, the size distribution of intermediate goods is determined.

The underlying principle of laser diffraction is very simple: Diffraction, respectively scattering of light on a particle produces behind the particle an angle-dependent intensity distribution, which consists of a ring system with light and dark areas. Depending on the particle size, the intervals of the light and dark areas vary, whereas the small particles generate large ring intervals and large particles lead to intensity distributions with closely bordering rings. With the aid of the Mie-theory the distances of the rings can be exactly calculated, whereas with sufficiently large particle diameters the so called Fraunhofer- approximation can be utilized.

During the practical realization of this principle, a laser beam illuminates sample material which is for the most part continuously transported through a measuring cell. A sensor situated behind the measuring cell, inside the optical path, then detects via angular resolution the by the particles diffracted, respectively scattered laser light. Through a special optical design of the instruments, the scattering patterns of all in the measuring cell illuminated particles of the same size are projected onto the same ring system, i.e. are more particles of the same size present, the intensity of the associated scattering rings increases correspondingly.

The most realistic samples though, do not only show individual particle sizes, but consist of particles with a wide band of varying diameters. Therefore overlapping of many various ring systems occurs. With the aid of a suitable mathematical process these overlaps become quasi unfolded and the particle size distribution is obtained as a result.

Now how wide exactly the individual size ranges are depends on various factors. The most important here is the angular resolution of the detector, which depends directly on the number of the detector elements, respectively and more precisely, the ratio of the number of the covered particle size area. Is for example a size range of 0,1 to 100 µm covered with 50 detector elements, clearly smaller size ranges can be sensibly calculated from it, unlike when covering an area for example of 0,1 up to 2000 µm, with the same amount of detector elements. Now basically it is also possible from a few detector elements to calculate a large number of size range intervals, but this does not make sense physically and a higher resolution and therefore no additional information can be obtained. Consequently, an important factor for the evaluation of a laser particle size measuring instrument is the effective amount of detector elements.

Up to what minimal particle size the breaking apart works strongly depends on the examined material, since the forces between the individual particles can vary greatly. With favourable conditions the dry dispersion can be utilized short of below 1 µm, a dry measurement in the nano range is normally though not possible. Far better can difficult samples be processed via wet dispersion. Here the sample material is added to a liquid closed loop (the typical concentration depending on the material ranges in the area of hundredth to tenth percent by volume), in which usually additionally an ultra-sonic source is integrated, which with sufficient energy can be pumped into the agglomerates, so that also agglomerates of clearly smaller particles can be dispersed unlike with the dry dispersion. Basically, it must be noted, that with many samples the choice of the suitable dispersion parameters (liquid, ultra sound, tensides etc.) constitutes the ultimate challenge during the measuring of the particle size distribution.

Therefore, with modern laser particle measuring instruments, the flexibility of the dispersion possibilities is of central significance. For example, the wet dispersion unit of the ANALYSETTE 22 NanoTec, offers the possibility besides the pump speed, also to adjust the ultra-sonic intensity. Additionally, three different degrees of filling of the liquid closed loop can be chosen and the utilized materials – stainless steel, glass, viton and PTFE – allow the usage of the most prevalent organic solvents. The entire system is designed modular; a measuring unit is equipped with the corresponding dispersion unit. Through the folded optical path and the utilization of a green as well as also an infrared laser a very wide measuring range is obtained (0,08 up to 2000 µm), nonetheless with very compact dimensions. Especially emphasised is the flexibility of the control software, with which even complex dispersion tasks can be solved.

Illustration 1 shows as a measuring example the cumulative curve for three different dairy products. For this, a small amount of the sample material was added to the liquid closed loop and treated for a set time with ultrasound. Clearly distinguishable is that the finest particles are that of the homogenized milk, whereas the cream shows substantially larger droplets of fat. 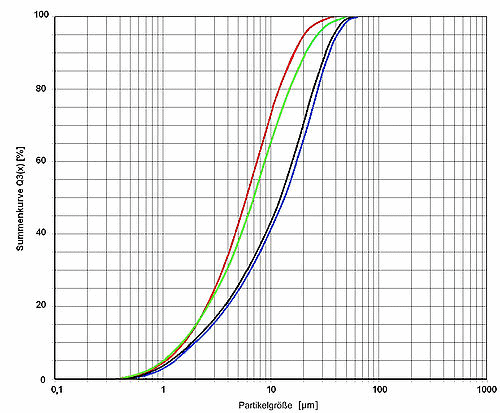 Illustration 2 shows the measured cumulative curves of four different kinds of chocolate with an ANALYSETTE 22 NanoTec. Important when measuring chocolate is the utilization of a suitable solvent, otherwise the measuring cells quickly become soiled and the reproducibility of the measurement clearly suffers.

FRITSCH is one of the internationally leading manufacturers of application-oriented laboratory instruments for sample preparation and particle sizing.

Here a short view of the FRITSCH instrument ranges: