For years Aviko Rixona is looking for more capacity of their production of potato flakes, a semi-finished product for several consumer products. The company for potato processoring started a year ago with a completely new process line. Remarkable there is the new milling line, that works with a totally different technology. And there were some challenges with that implementation.

The potato still is a popular product, that finds its way to the consumer in more and more varieties, from fries to chips and other snacks up to ready-to-eat baked potatoes. In Venray Aviko Rixona produces semi-finished products for a wide range of this products: potato flakes and granulate. In the entrance hall there is an advertising panel from Rixona´s own invention Raspatat, a frie that you can make very easily for using in a snackbar by mixing it with water and press it afterwards. The potato flakes consist of almost white coloured potato pieces with a diamieter of 0,5 to 5 mm (residual moisture about 7,5 percent). Customers in the food industry like that they can process this basic product at relative low temperatures and that it absorbes water more easily than the fine potato granulate. The flakes are produced according to the customers specification, enriched with additives and herbage.

Process technologist Irma Timmermans explains to us the new process line for the potato flakes production, that manufactures flakes in an efficient way at high speed. The yet not peeled potatoes that are delivered in trailers enter the factory on a long conveyor belt, where they get washed at first. In the next step they get “peeled” in big boilers.

Here the outside of the potatoes is cooked with steam pressure for some seconds. The potatoes get peeled in a centrifuge and in the following machine they get cutted in fifteen millimeter slices. The slices are subjected to a blanching process (70-80°C) and afterwards they get cooled in a water bath down to 25°C, so that the starch cells can harden. After cooking and pureeing of the slices the next step is the roll drying. In the hall where the cooking line stands there are two big roll dryers. One of them is surrounded by steam (170°C). The rolls release a continue layer of puree. In the middle of the hall there is a closed cabine, where the operator watches the running process on a couple of screens. The photographer looks forward to make pictures, but he is not allowed to. “The new rolls are really special. We don’t want them on pictures”, says Timmermans. 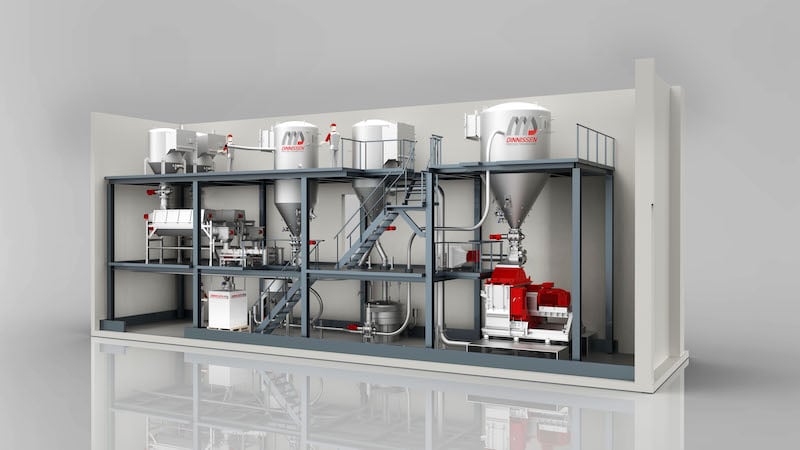 After the roll drying the potatoes are brought via pneumatic conveying to the next hall: the milling hall. In this factory hall they have build a ten meter high installation with three levels, with interceptors, cyclones and vibratory conveyors. “The old process had an open system with a conveyor belt. It is new that we use pneumatic conveying. The process flow now is from top to bottom.” Explains Timmermans. “This hall is actually really small and it was complicated to get the milling line in, but it worked very good. We have a good access to any point of the installation.” Design, engineering and the complete construction of the milling line was realised by the process technology company Dinnissen, including the pneumatic conveying system. When Timmermans startet at Aviko Rixona in june last year, the construction of the new process line had still to start. “I was thrown in at the deep end. That way you get to know a company very fast.” Prior to that she worked in a factory for herbage and spices as a process engineer. There she also had to do with milling and cooking of products. “I am familiar with this kind of process installations.” The two process lines come together beneath the milling hall in a big hammer mill. (brand: Hamex). The hammer mill is the hart of the milling and sieving process. “My predecessor has spent a lot of energy in choosing the new milling technology. The intention was an installation that works as stable and robust as possible. All the prework was done by him. We tested different mills. The Hamex was the best of them. Together with Dinnissen we tested different specifications of our customers with a small test machine. The results were very promising.”

Above the hammer mill there is a buffer store (5000 liter) for feeding the product into the mill. The hammer mill pushes the potato product through a sieve. This sieve can be changed to get other particle sizes. The hammer mill has a semi-automatic sieve changer. The operator takes the sieve out by hand and also by hand puts the new one in – a process that only takes a few minutes – so that the hammer mill can run further without product loss. “We are milling now in a new manner. But our customers of course want the same end product that they produce with our semi-finished product, and it has to be in the same quality. That ist what their facility is adjusted to. A potato flake can easily be damaged. That is why we had to regulate the process very accurately. To implement that was the greatest challenge.”

In the next hall stands the installation for adding additives to the product. It was constructed and delivered also by Dinnissen. “Because the new process line had a higher output, we had to replace this installation as well. Everyone had the feeling, that the old one was not fast enough for the speed of the new one.” Before that the additives were weighed by the operator by hand. Now the mix of additives is made by the scada-system. This system makes new batches completely autonomous. When the additives are added to the product, it gets stored in a bunker until it will be delivered to the customer. The second big challenge, said Timmermans, was the coordination of cooking and milling line to achieve the requested 24/7 production. “We had some problems in the beginning, but that is really normal when you start with a new process installation. When one line was working good, the second was a bit slow. The finetuning of the feeding also needed some time.” Because the process went from an open to a closed system, they had to adjust the weighing in the continuous product flow (kg/h) on the vibratory conveyors. “Nevertheless we succeeded quite fast in getting a constant product flow.” The new process line is in use since September 2017. In the meantime there were several adjustments for further improvement. The milling line was delivered end of august, the cooking line earlier this year. “Since February the new line is working exactly as it should. We achieve the desired product quantities without problems.”

In 1962 Rixona started at Warffum, Groningen, as the first agribusiness company in Europe with the production of potato granulate for the food industry. In 1985 the company was bought by Aviko, that is part of the agrifood group Royal Cosun since 2002 (sales: 1.2 billion euro, 3800 employees), and the division flakes and granulates of the potato processor went to the factory in Warffum. In 2005 Aviko took over the factory from Nestlé in Venray. That factory also produced potato flakes and granulate. 80 percent of the products are intended for the export within and outside Europe. South America and in particular Asia are the growth markets. Meanwhile the company also runs a factory in the Chinese Zhangye. “We operate in a booming business”, tells us the director Otto van der Gronden. “Worldwide the economy is developing further and that is why the demand for luxury products and snacks is growing. In Asia there are more and more companies that manufacture such products.” The demand increases annually for semi-finished products, and that was the reason for the extensive modernization of the old process line, tells Van der Gronden. “Our customers invest more in the renewal and automation of their production processes. We do not want to stay behind, but want to provide the same product quality or an even better one.” Aviko Rixona processes 200 million kilo potatoes every year and the greatest part of that was grown in their own country, only a fifth comes from other countries of northwest Europe. Even the potato peel finds its way to new products, for example starch derivate or animal feed.

We’re proud to be known for our expertise, quality products and tailor-made solutions. We’re even more proud that our customers and employees know they can count on us. By keeping engineering, production, testing, installation, commissioning and service in-house, we don’t have to rely on others, and that’s why others can rely on us. We believe ...