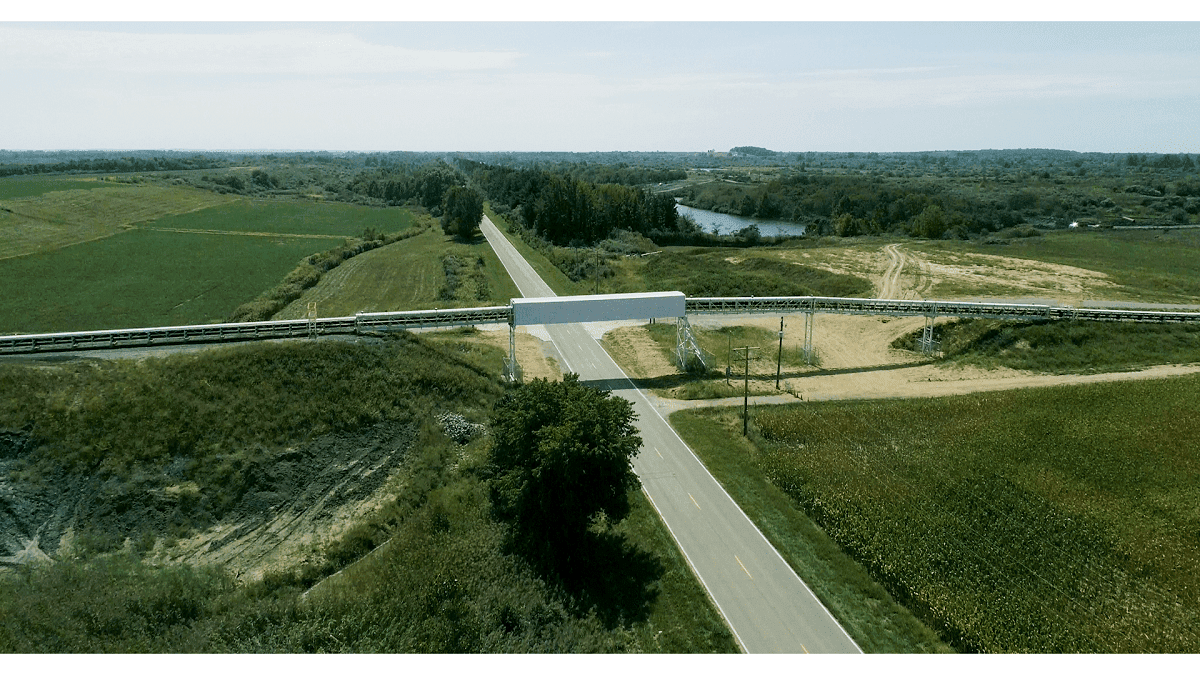 Since the late 1960s, BEUMER Group has been developing and producing curved overland conveyors, making the company one of the pioneers in this industry. Nothing has fundamentally changed in the functional principles of this technology since then - except for the feasible limits: With highly developed core components, precise calculation methods and own planning tools, the system provider continues to push the limits of what is technically feasible - while drastically reducing the time and costs involved both in the planning phase and in the handling of projects.

“Our belt conveyors are able to solve complex problems with regard to the transport of any bulk material whether in the mining or cement industry,” says Christoph Dorra, regional sales manager South America, Conveying and Loading Systems, at BEUMER Group. “While the basic task to transport bulk material from the material feed up to the final discharge point seems to be comparable, on closer inspection no system is similar to the other. The spectrum of potential conveyed materials alone requires individual consideration of the components to be used with regard to wear resistance or the maximum permissible gradients of a conveyor.” In addition, the mass flow to be conveyed and the height to be overcome are the main factors determining the dimensioning of the drive unit of an overland conveyor. “A further challenge is posed by systems at high altitudes,” says Dorra. At altitudes exceeding 4,000 metres, as it is often the case in the South American Andes, for example, it must be considered that the air pressure and thus the density of the air decreases with increasing altitude. This reduces both the cooling effect and the insulating capacity of the air. As a consequence, the drive units like frequency converters and electric motors do not achieve the specified rated power that applies for installation heights up to max. 1,000 metres above mean sea level. This is the so-called derating factor.

In addition to the pure material specification and the mass to be conveyed over a certain height, the topography along the conveying route is of particular importance in the project planning.

The biggest challenge: the topography

“In 2009, we implemented an overland conveyor in China that is able to curve on 85 percent of the 12.5 km long conveyor line between the quarry and the cement plant. The system literally winds its way to the destination, without any transfer point,” reports Dorra.

Potential obstacles appeared in the form of residential areas, roads and rivers that had to be crossed, larger bodies of water or mountains that could not be crossed. “Not everyone would automatically think of an overland conveyor as the optimal solution when faced with these challenges,” says Dorra. “But for us, these projects are a special attraction. Our target is to have as few transfer points as possible along the entire conveyor line”. This reduces both wear and tear and the environmental impact of dust, for example, but also increases the availability of the overall system and significantly improves ease of maintenance.

Four straight conveyors are converted to one BEUMER overland conveyor

A good example for such challenges is represented by the project of an American coal mine. Here, a BEUMER overland conveyor with a length of approx. 6.5 kilometres conveys coal from a new underground mine portal to its main coal prepration plant. In the original request for quotation, the client requested four straight conveyors where three transfer towers would have been needed. For BEUMER Group, there was clear potential for optimisation here, of which the system provider was able to convince the customer.

The BEUMER team was also faced with exciting challenges in a Belgian project. Since the 1970s, the residues of a coal-fired power plant were landfilled on a fly ash stockpile. It was intended to transform the terrain into a nature park. In order to make this possible, the fly ash had to be conveyed to the Mass river, about two kilometres away, where it is loaded onto ships for further transport. These bring the fly ash downstream to an adjacent cement plant, where it is recycled as an aggregate.

A Pipe Conveyor is used, whose enclosed design prevents the volatile material with the environment and enables a low-noise transport. This was of particular significance in this project as the conveyor runs over roads, rails and residential areas. In the residential areas, a particularly noise-reduced idler design developed by BEUMER is used, which meets the high noise protection requirements in this area. The prescribed limit of 35 decibels at a distance of ten metres from the conveyor roughly corresponds to a very quiet room fan at low speed. Here, the system also achieves a slope of 23 degrees, which can be easily implemented with a Pipe Conveyor. Because of the rough terrain, special cranes and even helicopters were used during the installation.

How does the system provider manage to provide the appropriate solution for each of these applications? “We can draw on our comprehensive experience,” says Martin Rewer, team lead overland conveyor at BEUMER Group. BEUMER Group installed the first conveyor of this type with horizontal curves already in 1969; the first downhill conveyor with regenerative drive in 1980. Since the 1990s, BEUMER Group has also developed into one of the leading suppliers of Pipe Conveyors. In 2019, two systems were commissioned in China that, with 5,500 tonnes of iron ore per hour, defined the current performance peak of the globally installed systems of this technology.

Since the first overland conveyor with horizontal curves was constructed in 1969, components such as idlers, belts and drives have continued to develop. In addition, the systems are becoming larger and longer and the routes more complex. This resulted in the necessity to also constantly improve the calculation and the planning tools in order to not only withstand the requirements, but to even be one step ahead.

In the first step of project planning, the systems must be dimensioned for the respective task. Using BEUMER calculation programs, a team of experts calculates the existing motion resistances and the related static and dynamic tractive forces of the belt of the system. These on the other hand determine both the drive power to be installed and the belt strength, and are also considered in the dimensioning of the horizontal curves.

“The energy consumption of long, horizontal belt conveyors is determined by the main resistance in the upper and return strand in stationary operating conditions,” describes Rewer. The energy consumption consists of the running resistance of the idlers, the indentation rolling resistance and the flexing resistance of both the conveyed material and the belt when running over the idlers. The forces required for overcoming these resistances depend on various operational and design parameters. They can be determined with the so-called single resistance method. If components with low running resistances are considered, such as belts with reduced indentation rolling resistance or running-optimised idlers, the calculations of the systems nowadays show considerably lower tractive forces of the belt than a few years ago. This not only results in lower energy costs. Since the tractive forces of the belt are at a lower level, also the radii of the horizontal curves can be selected to be correspondingly smaller, because these forces are decisive for the design of these curves. Accordingly, the routing of overland conveyors can now be realised in a more flexible way and with smaller radii.

From the virtual toolbox

“In order to plan the conveyor for the individual application, we reach into our virtual tool box,” Rewer explains. “This way we can arrange the whole routing of the system and then discuss it with the customer as a 3D plan”. BOLT, the BEUMER Overland Layouting Tool developed specifically for this purpose, generates almost automatically a digital 3D model of the conveyor in the virtual landscape during the project planning. The required topography data are available in the public domain or are provided by the customer. Often drones are used. The aerial photographs include topographical information, which is then processed into digital terrain models.

In the simulation environment, the experts can adapt the conveyor to the route. The almost real illustration of the conveyor in the landscape also serves to recognise possible obstacles and to consider them accordingly in the project planning. Furthermore, the technicians are able to add the earthworks (cut & fill) and the steelwork structures in simple and precise way and evaluate them. BOLT not only ensures a very fast first project planning of the route. Especially modifications or adaptations during the project can be taken into account within short time. Project-critical data can be supplied at short term by BOLT. It includes the definition of the entire equipments on the route as well as the coordinates for foundation and earthworks. Since these data are generated automatically and updated by BOLT in case of modifications, possible required adaptations of the route are not further time-critical. All necessary data can be generated immediately after rescheduling.

BEUMER Group is an international manufacturing leader in intralogistics in the fields of conveying, loading, palletising, packaging, sortation and distribution technology. BEUMER Group offers the right solution for almost every logistic challenge.

BEUMER Group Introduces a Modular System for its Palletizers

How to Make Processes Run Better