Designing an optimal process for bulk material mixing often requires trade-offs between high throughput rates and high product accuracy.  These choices are often presented when choosing between a continuous or batch process as different applications require different types of flows through the production line.  This article examines the benefits of both continuous and batch processes as well as a hybrid approach – continuous batch processing.

Continuous mixing processes are characterized by a consistent flow of material through the mixer where the discharge rate exactly matches the feed rate.  The primary benefit of continuous mixing is steady state throughput to feed the next processing operation on the production line.

On the other hand, batch mixing processes typically are not in a steady state flow.  Premeasured ingredients are added to the mixer, processed, and discharged in a single batch.  The major benefit of batch mixing is the precise control of ingredient ratios, mix quality and product accuracy.

In a continuous batch process system designed by Lancaster Products, the benefits of recipe optimization and mix homogeneity from a batch process can be realized simultaneously with the consistent throughput and high production rates of a continuous production line. The added capability of one-step mix-pelletizing is an additional advantage offered by utilizing a Lancaster Products high shear counter-current mixer.

Hoppers are utilized before and after the mixing step to deliver a continuous batch process.  Weigh hopper(s) above the mixer utilize load cells to pre-weigh the ingredients.  Once the mixer is ready for a new batch, a valve is opened, and gravity allows for a quick fill of the mixer.  When the hopper is empty, this valve will close to allow the weigh hoppers to prepare the next batch of ingredients to be mixed.

The Lancaster Products Continuous Batch Processing System is designed around its flagship high shear mixer which features a counter-current mixing action – a highly effective mixing technique for consistent uniformity, homogeneity, and rapid mix times.  The powerful combination of multiple mixing tools in the mixer, including the rotating pan, a high-speed mixing tool, and the counter-rotating plow, creates a shearing action within the mixing cavity and eliminates all dead zones in the mixer.

In addition to a superior mixing action, Lancaster Mixers can also granulate or pelletize in a single process.  Because the tooling and pan all are independently controlled, at the proper speeds Lancaster’s counter-current mixing action can create a rolling action inside the mixing cavity that allows for granulation and pelletization of materials.

In a typical Lancaster Products Continuous Batch Process System, the pre-weighed dry materials are delivered to a high shear, counter-current mixer from the weigh hopper above and are dry mixed.  Then, if required, wet additives or binders are metered in, and a wet mix is completed.  Finally, if the desired end product has a size requirement, the mixer moves to a granulating or pelletizing cycle before discharge.  All of these steps are completed in a single machine, without intermediate material handling steps, complex process control of multiple machines, or added inefficiency.

The Lancaster Products system is capable of feeding multiple lines with finished products.  Once the mixer discharges to the discharge hopper, the attached continuous table feeder has the ability to feed multiple lines.  Multiple mixers or parallel lines allow for increased production and redundancy to ensure you always have a continuous output.

Best of Both Worlds

The Lancaster Products Continuous Batch Processing System allows users the best of both worlds.  For continuous processing applications, users now can take advantage of the precision of a Lancaster Mixer to improve product quality and accuracy, increase production-line yields and throughputs while reducing additives.

For batch processing applications, users can now take advantage of a continuous production flow to improve output without losing any of the precision of the batch process.

The Lancaster Products Continuous Batch Processing offering is a superior alternative to traditional production lines by offering the benefits of both types of processing with the added ability of one-step mix-pelletizing during the mixing process. 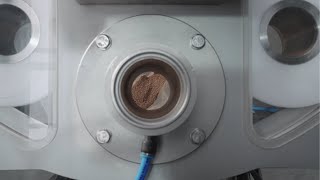