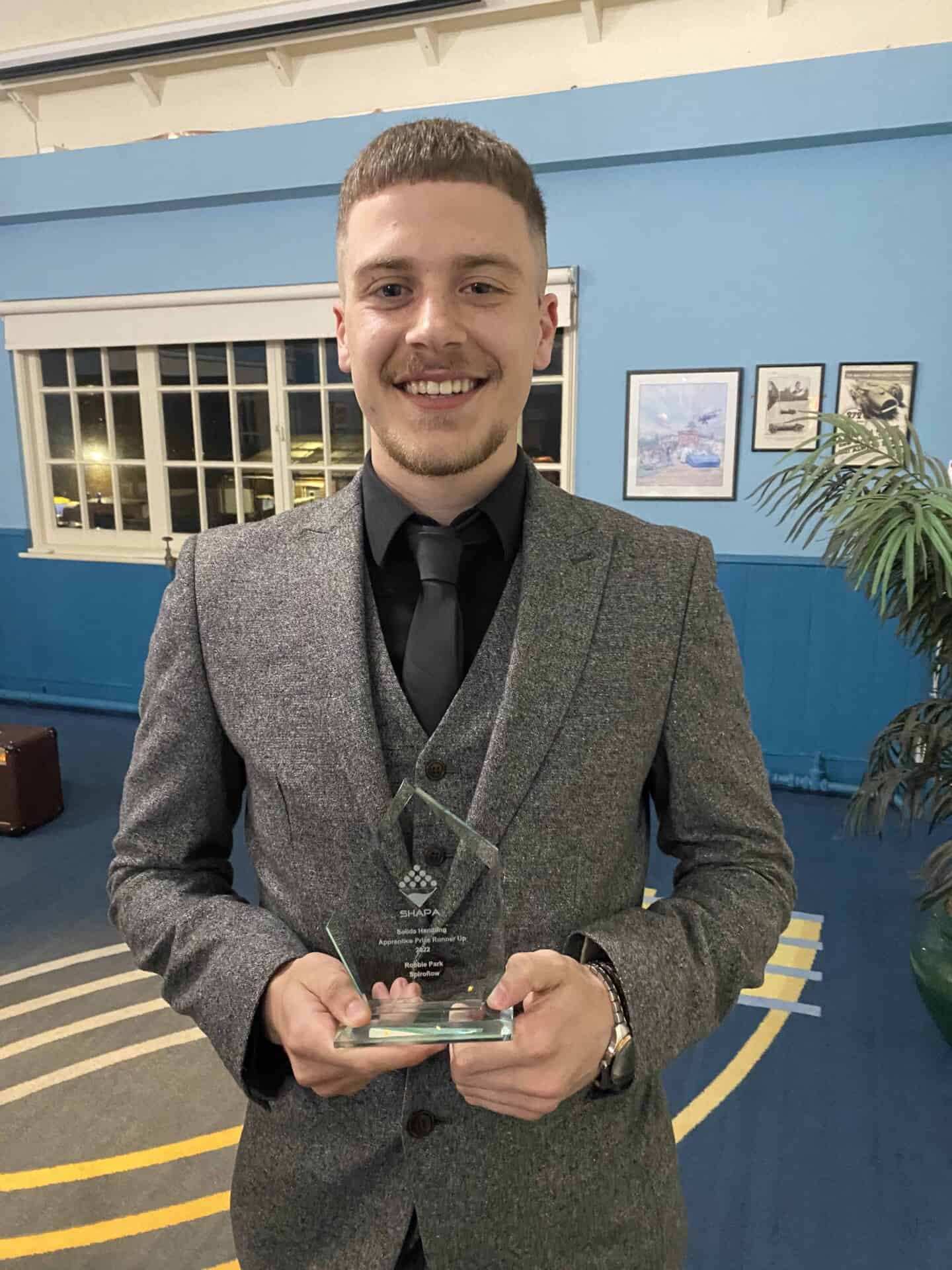 Spiroflow apprentice, Robbie Park, is celebrating having won an Apprentice Prize Runner-up Award at this year’s SHAPA Solids Handling Industry Awards, held at the Brooklands Museum in Weybridge, on 27th April 2022. He was awarded £250 as a cash prize.

SHAPA has been the UK’s leading specialist Association for the solids handling and processing industry since its formation in 1981 and has over 100 members. The annual Solids Handling Industry Awards are open to all UK registered member and non member companies and institutions operating in the Solids Handling and Processing Industry. Spiroflow has won the prestigious Company of the Year Award and the Newcomer of Year Award at previous SHAPA awards events.

For the Apprentice Prize Award, the SHAPA judging panel based their assessment on an apprentice’s development through a project or challenge overcome, together with a short video presentation. The aim of Robbie’s project was to set up a method of measuring customer satisfaction, by creating a form and trialling ways to acquire data from customers that could be fed into one of Spiroflow’s CRM systems. This is turn will allow service/sales teams to have up-to-date scores on performance and be able to identify KPIs (key performance indicators). By introducing reviews from customers, the intention is to help boost customer retention and repeat customers through tailored lead nurturing post sales.

Throughout the project, Robbie overcame a number of barriers to success, most notably being  the reduction of integrated software costs from a 4-figure sum to zero by analysing different options and finding a viable workaround. On completion, Robbie’s project was a huge success and has been widely adopted by Spiroflow’s sales staff.

Commenting on his project, Robbie said: “As an apprentice it is great to manage a project that becomes a tool used daily by all relevant stakeholders, it is also good to give back to the organisation and prove my worth to them as a thank you for giving me the opportunity to begin my career with them. I feel like this project highlighted what I can bring to a team, and I hope it is a sign of things to come in the future. “

Spiroflow’s managing director, James Podevyn, added: “I’m delighted that Robbie has won one of the Apprentice Prize Awards, which is richly deserved. His project proves that he has the tenacity and commercial nous to tackle complex and demanding assignments in the future.”

Find out more
This article is published by
Spiroflow Ltd

Spiroflow is a global leader in the field of powder handling and dry solids processing and an emerging leader in control systems integration.  Throughout our 45-year history, our design engineers and process automation ...