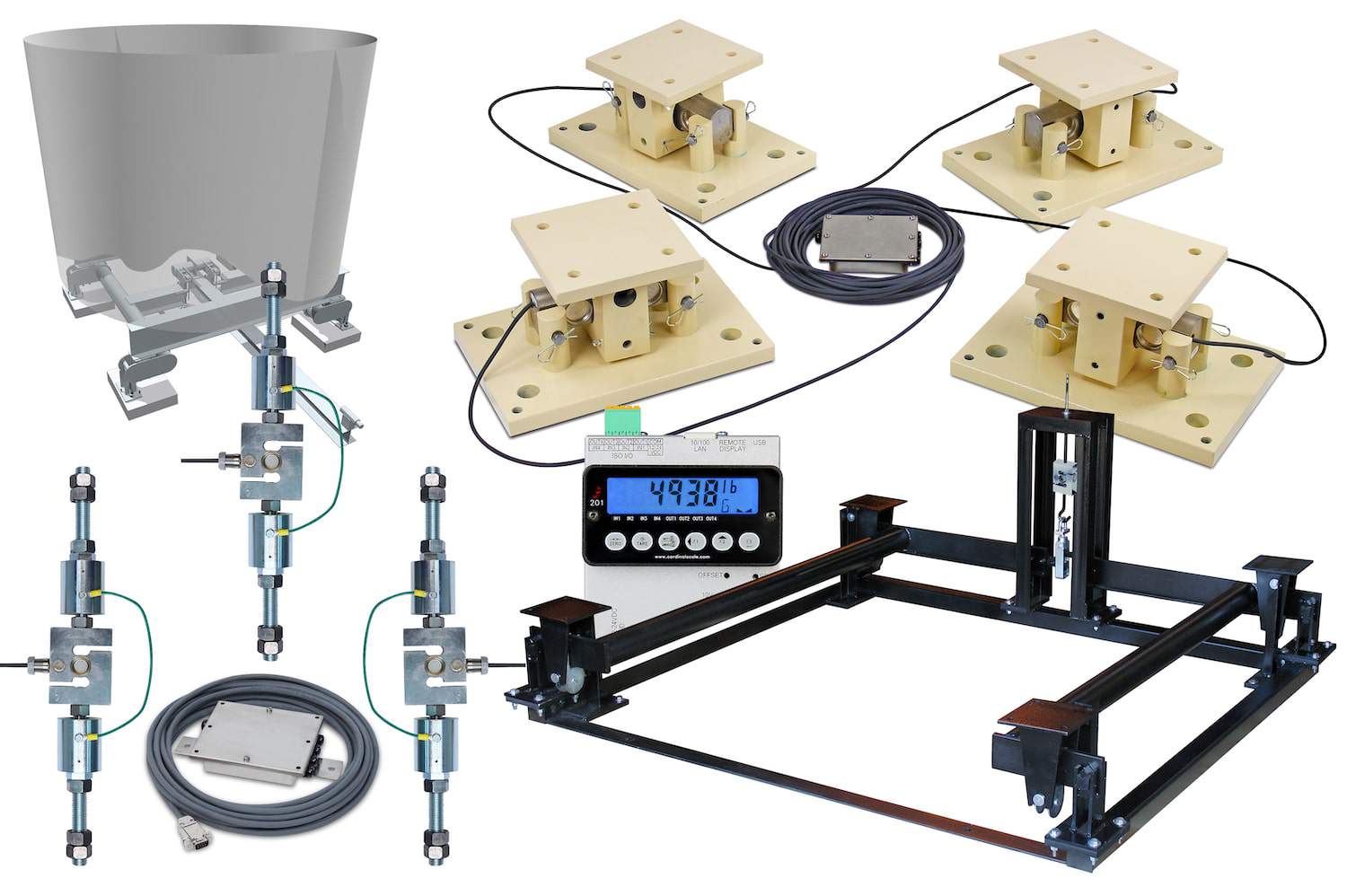 Tank and hopper scale systems are a highly versatile and customizable weighing tool that can be used in a wide range of bulk weighing applications.

Mixing, blending, batching, inventory control, material portioning, and general weighing are just a few examples of processes that require a hopper system. Scale systems used in hopper weighing are available in a wide range of sizes, shapes, and capacities that can fit almost any application. There are a few different weighing systems that can be utilized for hopper weighing systems and the following information will help differentiate these options.

Levered tank and hopper scales can be floor stand-based or suspended, and this type is the oldest style of the four systems explained in this article. Floor stand and suspension hopper scales are highly customizable due to great variation in base stand pipe lengths and the weights they can handle. Levered floor stand and suspension systems can weigh round, square, and rectangular tanks that have capacities ranging from a few thousand to several hundred thousand pounds. Floor stand designs feature hopper feet are placed upon girder chairs, attached to a lever platform, that pull down upon a suspended load cell(s) that is attached to a load cell stand. Suspension designs suspend overhead and attach directly to the hopper, which pulls down on the load cell(s) between the hopper and the scale support pipes.

There are generally several permutations of any levered hopper system, and they can be customized to almost any heavy industrial or agricultural weighing application. Suspension and floor stand lever scales that are NTEP legal-for-trade certified will exemplify a higher level of quality and accuracy for the system.

Electronic hopper weighing systems have a great amount of variability regarding usage. This is the most commonly used type today due to lower cost and easier installation. Three- and four-cell systems are the most prevalent and are generally constructed of mild or stainless steel load cell stands. Their design is simpler than a levered hopper system due to simply being a group of load cells placed in individual mounting hardware. Shear-beam, double-ended shear beam, compression, and suspension load cells can be used under hopper feet or suspended tanks and hoppers from above. Electronic hopper systems can weigh tanks and hoppers ranging from a few thousand pounds to hundreds of thousands of pounds.

Electronic load cells offer a great amount of protection against moisture, sediment, and filth that accrues due to the weighing process and they are typically manufactured from stainless steel. Flexion or elongation of steel within the center of the load cell elicits movement within the load cell’s strain gauge and sends that analog signal from the load cell, through wiring, to a junction or summing box. The combination of weights gathered from each load cell assembly is aggregated within the summing box that is then sent to an indicator.

Electronic hopper systems are well-suited for both indoor and outdoor applications. Electronic hopper systems are robust, easy to assemble and bolt down, and the wiring of load cells to the junction box is straightforward. While it’s typically not necessary for the weighing system to be OIML or NTEP legal-for-trade, it is a good practice to look for load cells used in your electronic weighing system that are OIML or NTEP approved for accuracy and quality standards.

Hydraulic load cell assemblies feature compression-type load cells that do not use strain gauges or internal electrical circuitry. Hydraulic fluid is contained within the load cell and, when compressed, causes a pressurized change that is sent to a totalizer cabinet through tubing. The totalizer cabinet features pressure transducers which then convert the pressure signal to an electrical or analog signal. Several modules of groups of three and four load cell configurations are typical, and modules of larger numbers can measure into the range of a million pounds or more.

Hopper scales come in a wide variety of types that can be used in almost every industrial setting for bulk weighing. Levered, electronic, digital, and hydraulic hopper scale systems are each specially designed for certain settings and it’s a good practice to scrutinize which type would best fit your application.

About Cardinal
Related articles
This article is published by
Cardinal/Detecto