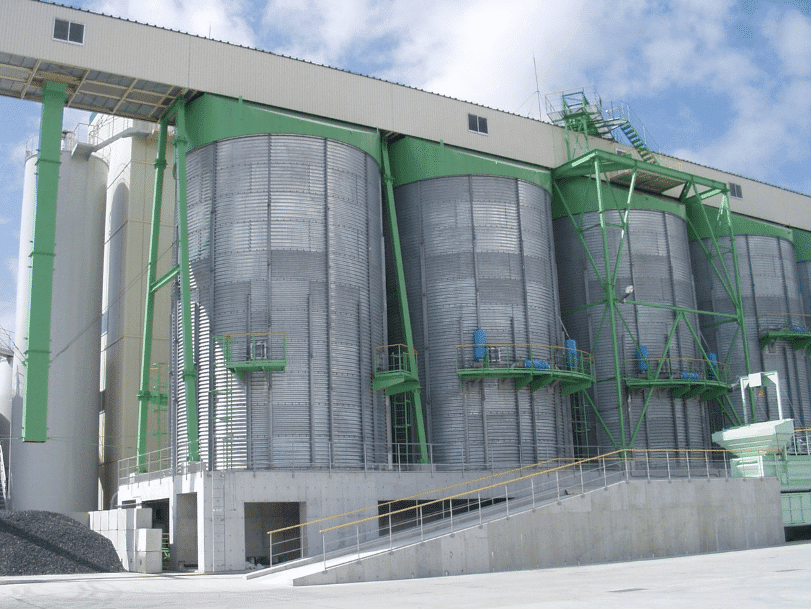 The ready mixed concrete factory located in west side Japan had a clogging problem frequently when discharging sand which is stored in the 6.5 meter diameter, 10 meter height silo.

Sand that has been stored for a long period in the silo gets moisture due to humidity, and bridging phenomenon occurs in the silo. Therefore, when producing ready mixed concrete, the discharging work from sand stored silo was not performed properly. Production line system errors frequently, and production capacity was not stable. For the discharging work, three or four operators had to poke with a metal rod from inspection door or poke from the top of silo to eliminate the clogging inside silo. Since the poking work with metal rod is a heavy labor and quite dangerous work, this ready mixed concrete factory was considering improvement.

The sales representative of EXEN was consulted by this ready mixed concrete factory to solve a clogging problem immediately. EXEN proposed and installed total 6 direct blasters, including a timer control panel for one large silo with a diameter 6.5 meter and height 10 meter.

The direct blaster accumulates supplied air from compressor in the blaster tank and blasts into the silo through the nozzle by operating a solenoid valve. Since large volume of air is blasted like a blank shot, clogging inside silo can be cleared effectively.

EXEN suggested that blast interval is set to 1 minute using a dedicated operation panel. The blast interval is shortened or lengthened according to the condition of clogging and supply air. Since the twin blaster has blast valve on the left and right of the tank, it is possible to blast widely with one blaster. Furthermore, initial cost can be also reduced.

Accordingly, user could eliminate the work of dangerous poking work with metal rod.

The sand in the silo can be discharged smoothly, factory downtime due to frequent equipment errors has been eliminated, and then production capacity could be stabilized.

We provide the best solution for your clogging problem with EXEN wide range blaster models including control panel, installation position according to the each conditions.

This article is published by
EXEN Corporation

Since 1915, Exen Corp. has been solving clogging problems with its air knocker (impactor). The air knocker continues to perform and provide results on any necessary work type, and is especially effective against fine powders and sticky or clinging ...

No More Banging Your Hopper and Bin