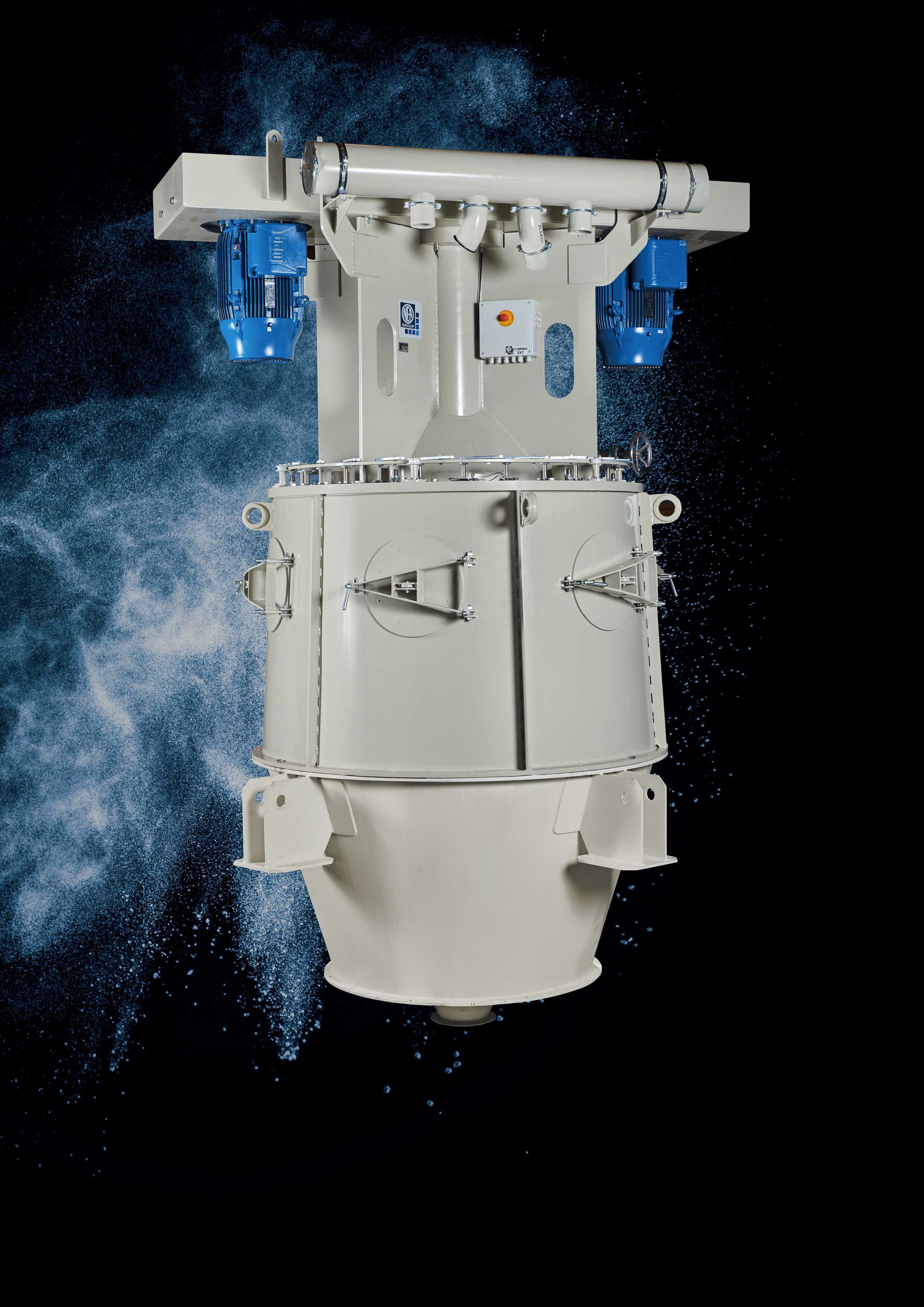 NEUMAN & ESSER optimized an existing ball mill system at an Italian manufacturer of paints and pigments for the ceramic industry by replacing the existing classifier with an NEA DCX ultra-fine classifier.

As a result, the plant now delivers 50% more throughput and a particle size distribution that the customer was previously unable to produce in continuous operation. The specific energy requirement of the plant was reduced by 30% due to the now uninterrupted service and the significantly increased throughput.

Many aged grinding plants are still doing their job today, but with performance data that are no longer up to date. Sophisticated products with high-quality requirements can usually only be produced very inefficiently on these systems, and thus at high production costs. In order to make these otherwise reliable plants work almost as efficiently as modern units, modernization is often the best option to adapt them to the new requirements. A central element of such modernization is the replacement of the classifier unit. This allows product quality and throughput to be increased, often considerably, and specific energy requirements to be reduced significantly so that the plant can continue to produce competitively for many years to come.

In the present case, a producer of colors and pigments located in northern Italy was experiencing difficulties with an existing ball mill. The desired product quality in terms of fineness and color could not be produced consistently. Every production run had to be stopped after a few days because the color of the pigment shifted during grinding. The reason for this color shift was a broadening of the particle size distribution. In particular, the increase in the proportion of particles < 1 µm correlated clearly with the undesired color shift. As soon as the material was outside the product specification, the plant had to be stopped and emptied. As a result, about 5 tons of scrap material was transported out of the mill each time and had to be disposed of. This process and the restarting of the grinding plant were also time-consuming and in practice took about 24 hours.

Due to the above-mentioned problems, the customer contacted NEUMAN & ESSER to get information about possible alternative grinding principles to produce the desired product in a controlled, continuous process. Impact grinding on a fine impact classifier mill and comminution on a jet mill was investigated. It was found that the jet mill process in particular has the disadvantage of an extremely high specific energy requirement. Therefore, the question arose whether the existing ball mill system could be upgraded for the continuous production of a high-quality product by optimizing the settings or replacing individual components. For this purpose, an observation of the existing plant was carried out, during which all process parameters (drive power, air volumes, mass flow, fineness, etc.) as well as the complete geometry of the plant were recorded.

On the basis of a specifically created PID using the recorded data, a detailed problem analysis was carried out. It turned out that very fine particles could not be separated sufficiently by the existing classifier due to insufficient dispersion and inappropriate particle guidance. As a result, these particles were enriched in the grinding circuit, which continuously increased the ultra-fine fraction in the end product.

With these results on hand, NEUMAN & ESSER then developed a solution proposal, which provided for the replacement of the existing classifier with an NEA DCX classifier. This classifier is characterized by an enormous efficiency in the ultra-fine range, so those ultra-fine particles are continuously discharged. This prevents the build-up of a high proportion of ultra-fine particles in the circuit of the grinding plant. Furthermore, new concepts were developed for the air volume balance, particle separation, and the dosing of the feed material. By adapting these measures to the significantly more efficient classification process, a comprehensive overall concept for plant modernization was now available.

The replacement of the separator was completed in June 2019, so that the customer was able to quickly resume operation in July of the same year with the now converted plant. The considerable advantages became clear immediately with the resumption of production. Once the system parameters for ensuring the required particle size distribution had been found, it became apparent that the system could now be operated with a throughput increased by 50%. At the same time, the total specific energy requirement fell by 30 %. This increase in efficiency is mainly due to the new DCX classifier, whose specific energy requirement is only about half that of the previous classifier. Due to the fact that with the DCX practically all particles ground by the ball mill are immediately fed into the classification process, the DCX has a significantly higher selectivity and separation efficiency. These advantages are the result of the targeted flow and product guidance within the classifier.

In addition, the entire pneumatic conveying system around the ball mill has been improved by modifying the air inlet and outlet to significantly reduce the unwanted fine dust content with particle sizes < 1 µm.

The massively increased efficiency was obvious very soon after the start of production. Now, the customer was very curious to see to what extent continuous production operation is now possible. The aim was, that the time-consuming and costly interruptions in production, where 5 t of scrap material had to be disposed of each time, would finally be a thing of the past. And indeed, the finest fraction (proportion of particles < 1µm) now always remained well below the limit of 8%, making the frequent overloading of the mill a thing of the past. In the meantime, it has even become apparent that since resuming production more than a year ago, the plant has not had to be shut down once because of excessive ultra-fine particles.

NEUMAN & ESSER is a company which builds high performance machines, such as reciprocating compressors, pendulum roller mills and impact classifyer mills, and related systems. Close to 80 years experience in mechanical processing technology and the continuous dialogue with clients form the principles for the high performance and quality level ...