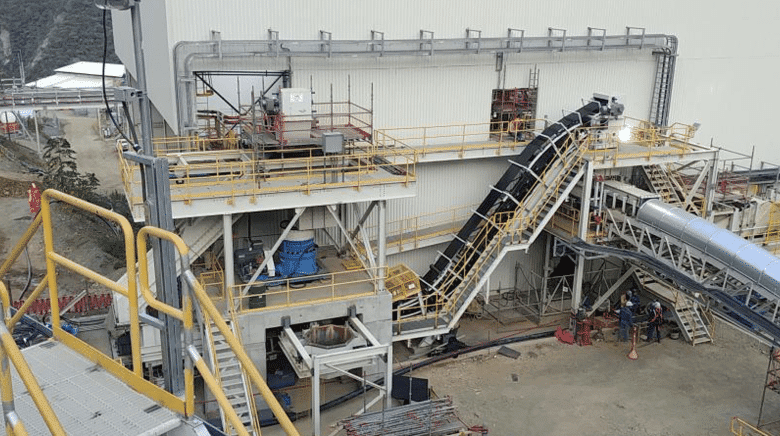 These two systems were rationalized to be the same belt width and to use the same mechanical equipment (idlers, drives, pulleys, belts, etc). However, the first unit achieves a higher lift and length than the other. Unit 1, adjacent to the grinding SAG mill has a lift of 14,250 mm (46.8’) and a length of 34,100 mm (111.9’). It feeds a crusher and then feeds the second Sandwich conveyor. That unit has a shorter lift and length at 6,750 mm (22.2’) and 17,500 mm (57.3’), respectively. Unit 2 elevates the pebble ore outside of the building and discharges it onto a conveyor which also delivers stockpiled material into the building.

Early in the commissioning process, Continental Gold determined that a conventional conveyor on the site (not supplied by DSI) would need to be modified from a simply supported structure to a cantilevered head end. Continental reached out to DSI for their structural engineering expertise, and the additional task was completed quickly and economically. Though the new steel was procured by the site personnel, DSI ensured that the modifications could be made with minimal additional cost. The result was an elegant strut design that maintained the support at the head end, while also incorporating modifications to allow for access to important equipment.

This is the second gold project on which DSI has cooperated with M3 Engineering. DSI also executed a contract through M3 for an overland conveyor system at Goldcorp’s Los Filos Project in the Nukay mining district of central Guerrero State in Southern Mexico.

Buriticá is approximately a two-hour drive on the paved, Pan-American highway from Medellín, Colombia‘s second-largest city. Some highlights of the project are noted below:

The long-hole open stoping mining method will be employed to extract high-grade ore from the underground deposit. The Cut-and-fill method and shrinkage stoping methods will be applied to extract lower quality ore.

The underground ore body will be accessed via three ramps namely the South ramp, Yaraguá ramp, and the Higabra valley tunnel. The mining rate will initially be 2,100 tons per day (tpd) and will be ramped up to 3,000tpd by the third year.

Buritica’s high-grade ore and hearty output estimates make it a rare find. It is shaping up as a key test for the future of large-scale underground mining in Colombia, whose mostly unexplored mineral riches have miners rubbing their hands.

DSI Sandwich belt high angle conveyors take on many forms and offer many advantages. Each DSI Sandwich Conveyor uses two standards, smooth-surfaced conveyor belts, face-to-face, to gently but firmly contain the product being carried. This not only makes steep angles possible; it also offers a spillage free, environmentally sound operation because the material remains secured between the belts.

A DSI sandwich conveyor is capable of higher conveying speeds and greater capacities than other high angle conveying methods. With the availability of wider belts and accompanying hardware, capacities greater than 10,000 t/h can be easily achieved with a DSI Sandwich conveyor. High angles of 90° are typical, and lifts of 300m are easily accomplished.

The use of all conventional conveyor parts ensures high availability and low maintenance costs, as well as interchangeability of components and fast delivery of replacement parts.

Dos Santos International is the ideal consultant and supplier. We offer the DSI Snake Sandwich high angle conveyor, the most reliable and economical solution ...